Well I hope you know this is not true. It might work for a while but next thin you know you can't fit in the pants you bought 2 weeks ago.

I KNOW! I HAVE THOSE SUPER CUTE CAPRIS I BOUHT LAST YEAR AND I NEVER WORE!!!

You know why it doesn't work?

I'll tell you why! BECAUSE LIFE HAPPENS!!! And even if I'm almost never hungry on the Dr. Oz 2 weeks thingy diet....At one point we all need other foods than chicken breast and baby spinach!!!

This week I made chili with lean ground beef, no cheese, no sour cream...but I added 1/4 avocado on our bowls. And green onions of course!
..
in this case the key is PORTION CONTROL!!! I ate 1/2 cup with the 1/4 avocado and 1/2 of a pickle and was fine with it until I took another helping! Yikes! I did not feel good AT ALL!

I am used to think that a chili portion is a BOWL FULL well not anymore...

I do eat food I love but not every week. Splurge days are a must! 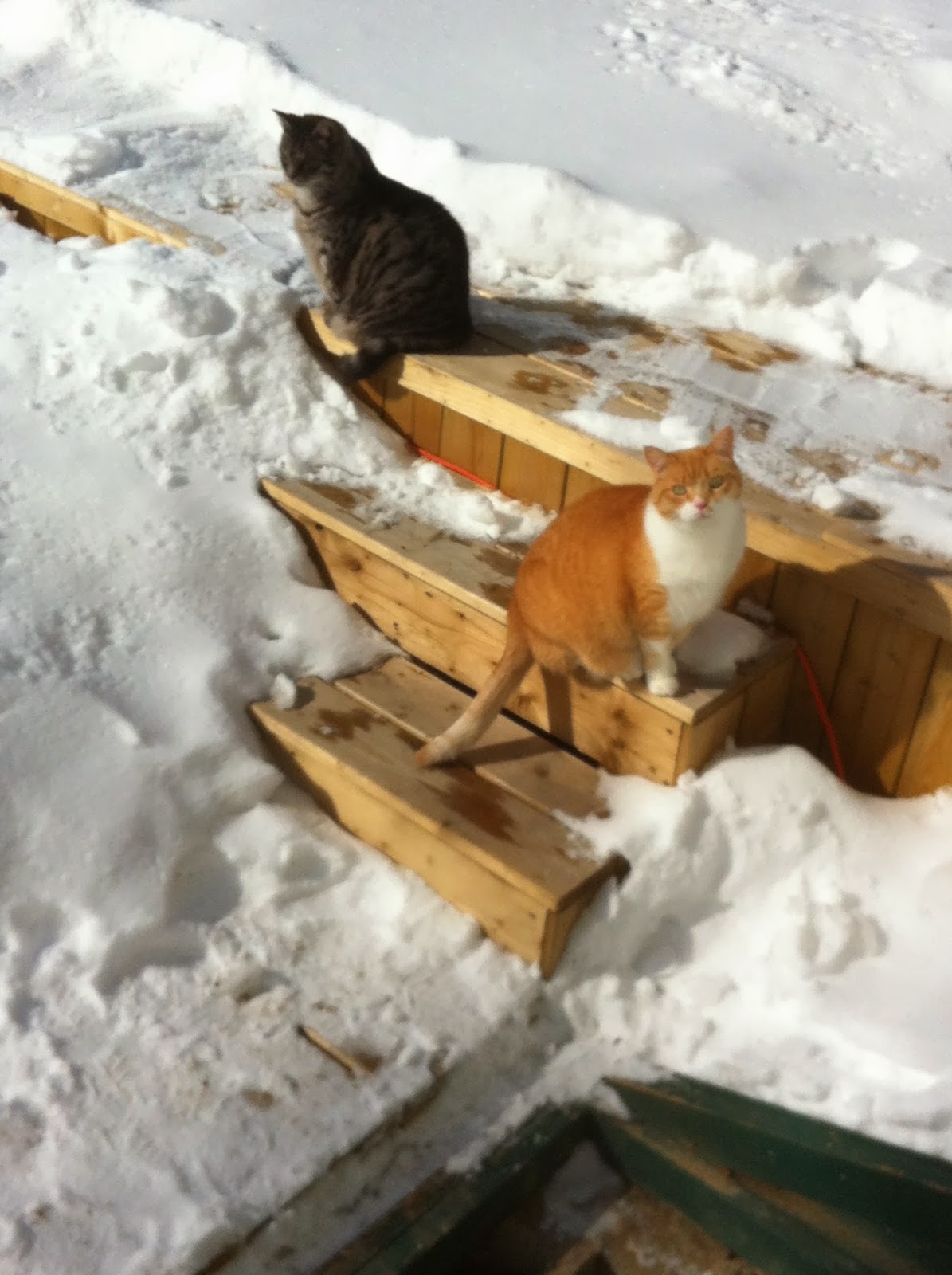 Bob and Boubou agree! One must splurge
to keep mental health balanced! 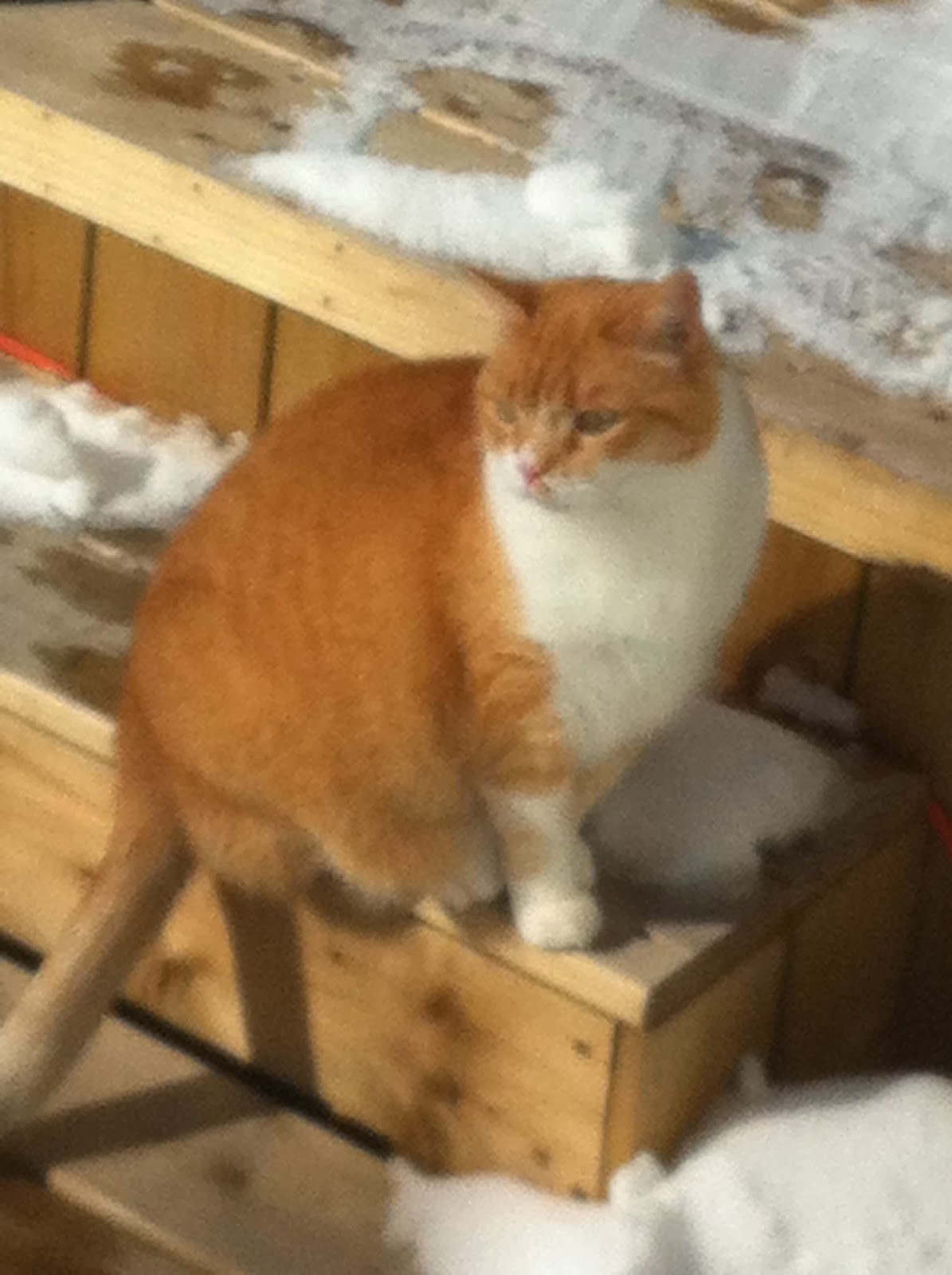 Boubou loves the sun but hates to get his
paws wet! 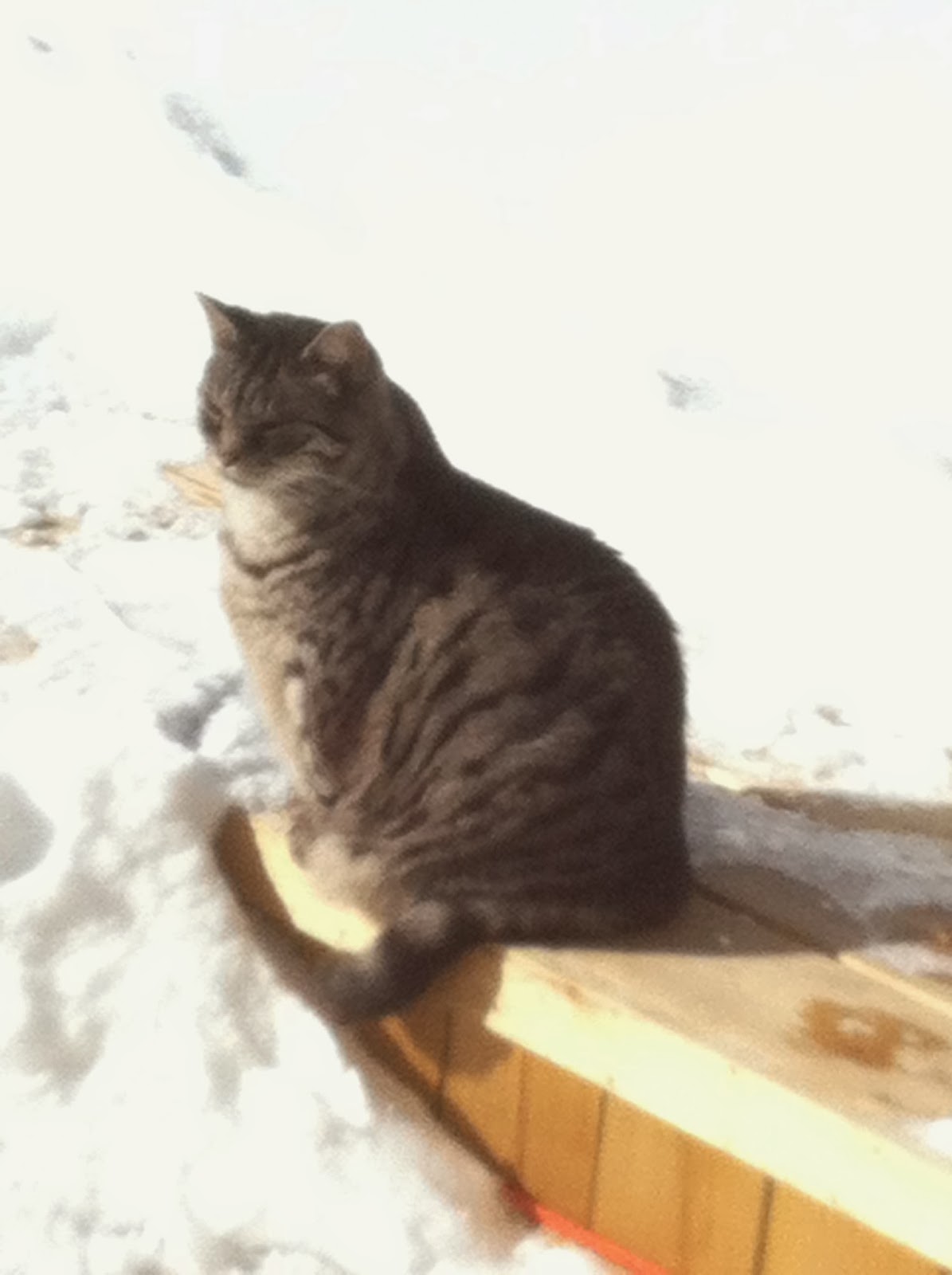 So my weight sliming friends, I wish you patience and good health and
hang in there!
Steady wins the race :)
Posted by Vonlipi at Wednesday, February 26, 2014 No comments:

They really annoy me. For some reason I can't sem to keep thm clean.

I feel buying a range with a ceramic cooktop was a mistake.

I found the Vileda Ceramic Scrunge for around $4.00....and they are good for a lot of times.

But not quite up to par....you need the extra touch...

The extra touch is Barkeeper's Friend!!!!

You wet the cooktop, sprinkle some BKF make a paste (add water if needed)


And it is really beautyful and squeaky clean !!! 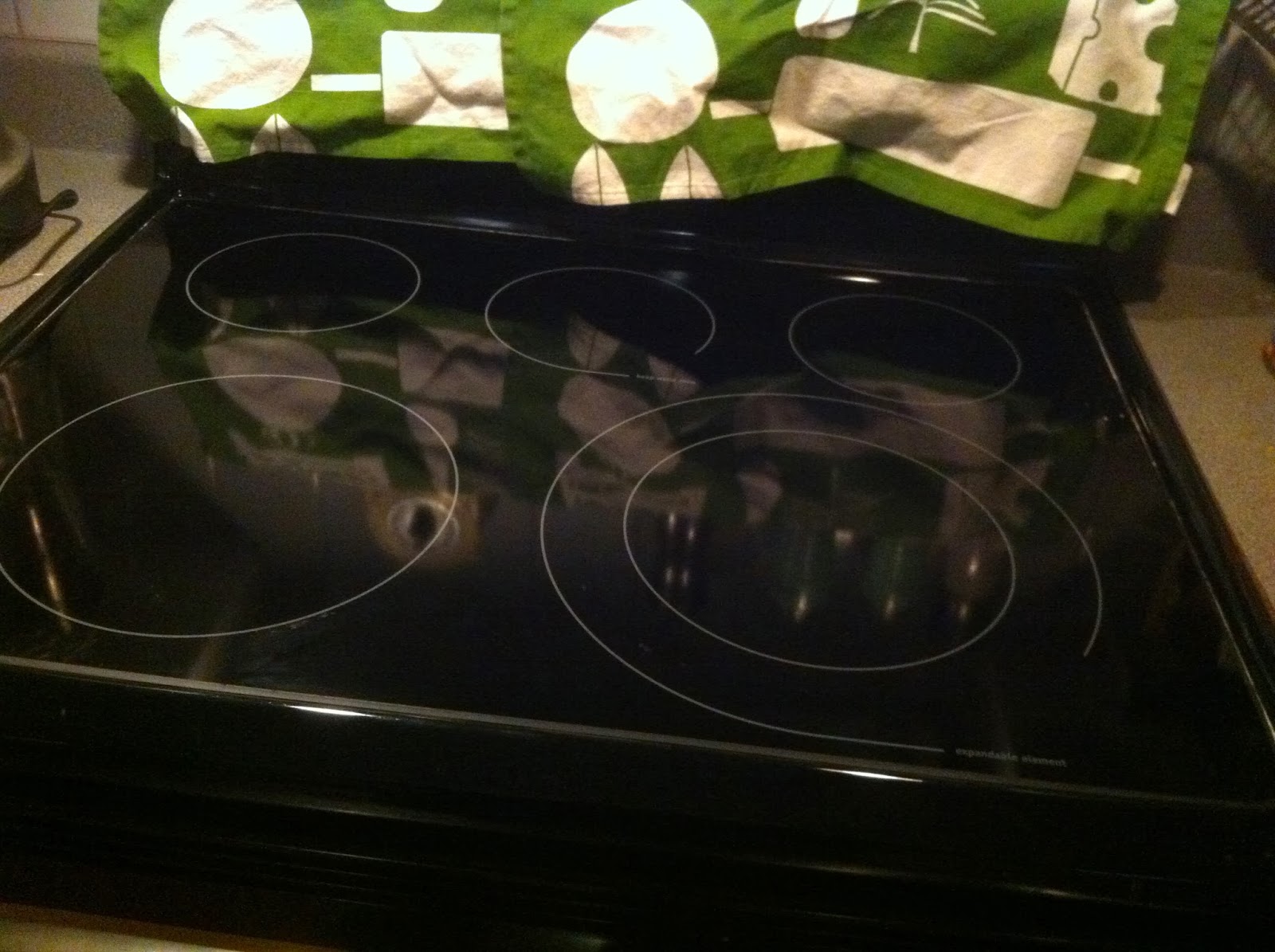 This is a good one!

We all love chicken recipes, it's a fact.

It is always the most requested recipes. I was watching a food show a couple of weeks ago,while cooking...It is what I do, LOL

The show was Mad Hungry with Lucinda Scala Quinn. You will recognize her as one of Martha's slaves from Every Day Food.

The recipe that caught my eye was Lemon Thyme Chicken Paillards . I love paillards because the absorb marinade super fast and they cook even faster.

First time I made it I even shovelled the BBQ. It was fresh and sunny, just what the doctor ordered for this grey cold February. The next time I didn't flatten the chicken, but just cut it up in thin pieces, let them marinate and cooked them in a non-stick pan. It is delicious with the salad on top too!

I wanted to post this delightful recipe before but, I had a lot of problems finding the recipe on line, as Martha was overhauling her web site....Even today, I could not do a search and had to subscribe....I will be fooded by Martha info....inspiration as she calls it.

Now don't get me wrong, I was a huge Martha fan and am still a fan but some recipes I tried just weren't up to par and at the end it's the pushiness and know-it-all ness that got to me.

Plus we don't get her shows much in Québec anymore. We don't get the Hallmark channel

Plut please do try this delicious recipe you won't be disappointed!
Posted by Vonlipi at Wednesday, February 12, 2014 3 comments:

Now if you've tried the Dr. Oz thing, by now I'm sure you're pretty sick of chicken,turkey and fish....

I was! And I saw Dan sneek me a couple of evil looks come dinner time!!!

Well I decided to add shrimp to the rotation. Shrimp is low in calories and is reat in salads or with that 1/2 cup brown rice.....

Thank god I had a big bag in my freezer ! Shrimp is something I only buy on sale; like half off or $5.00 off.

And even if it is not on the list I added spaghetti squash...If you've been on a diet....you know the spaghetti squash! Low in calories, low in taste, but pretty filling.

That vegetable broth of his? I found it too expensive, so it was better for a while to buy the Campbell's salt free vegetable broth, but to us it tastes too much of onions! So I got into the habit
of keeping onion butts and parsley stems and cabbage leaves in a zipper bag in the freezer for the next batch of broth....Yummy!

We usually drink it with a small can of V-8. A nice snack in a busy day.

But what I really wanted to share with you today is this beautiful amaryllis we have in our living room. 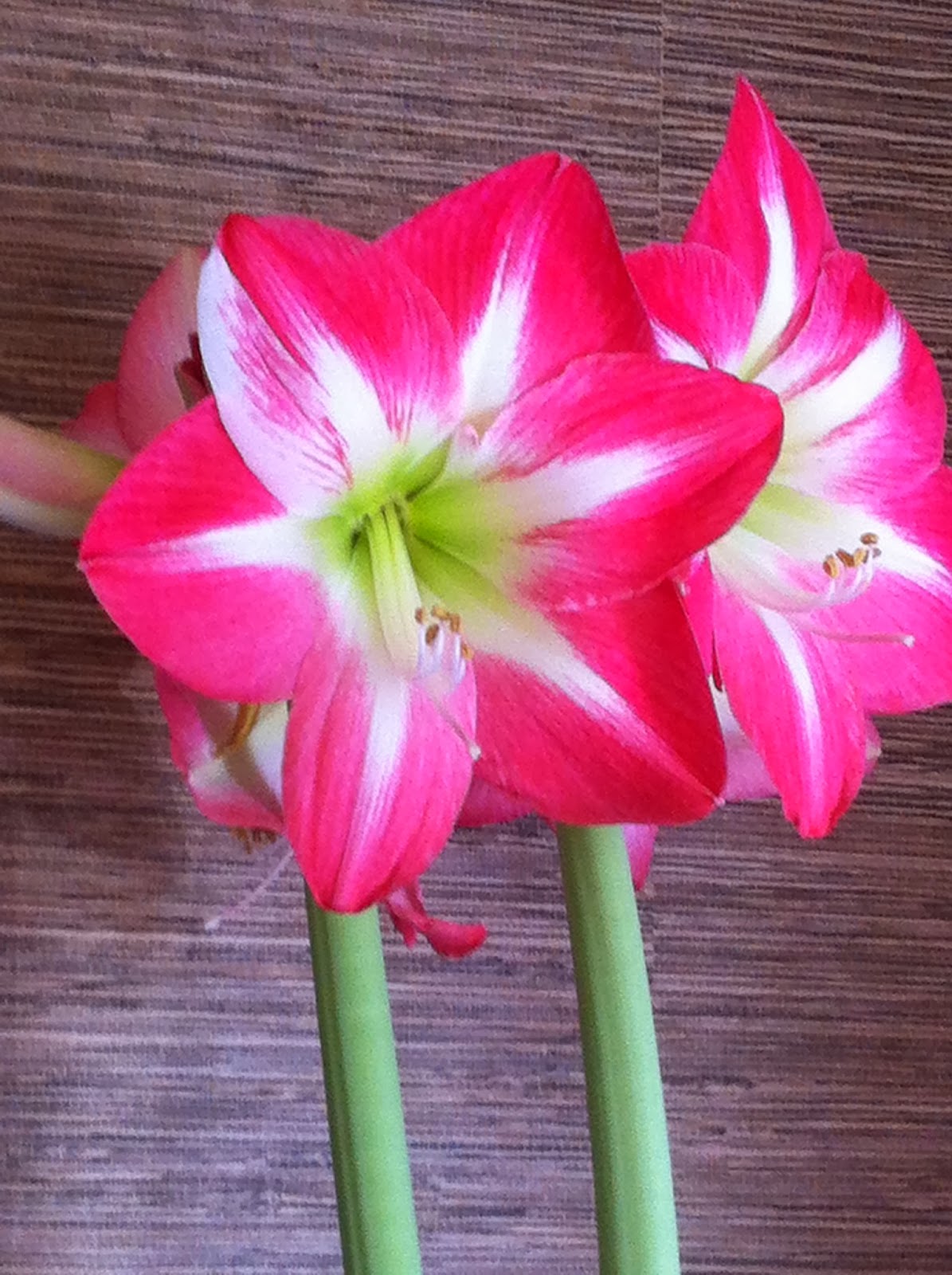 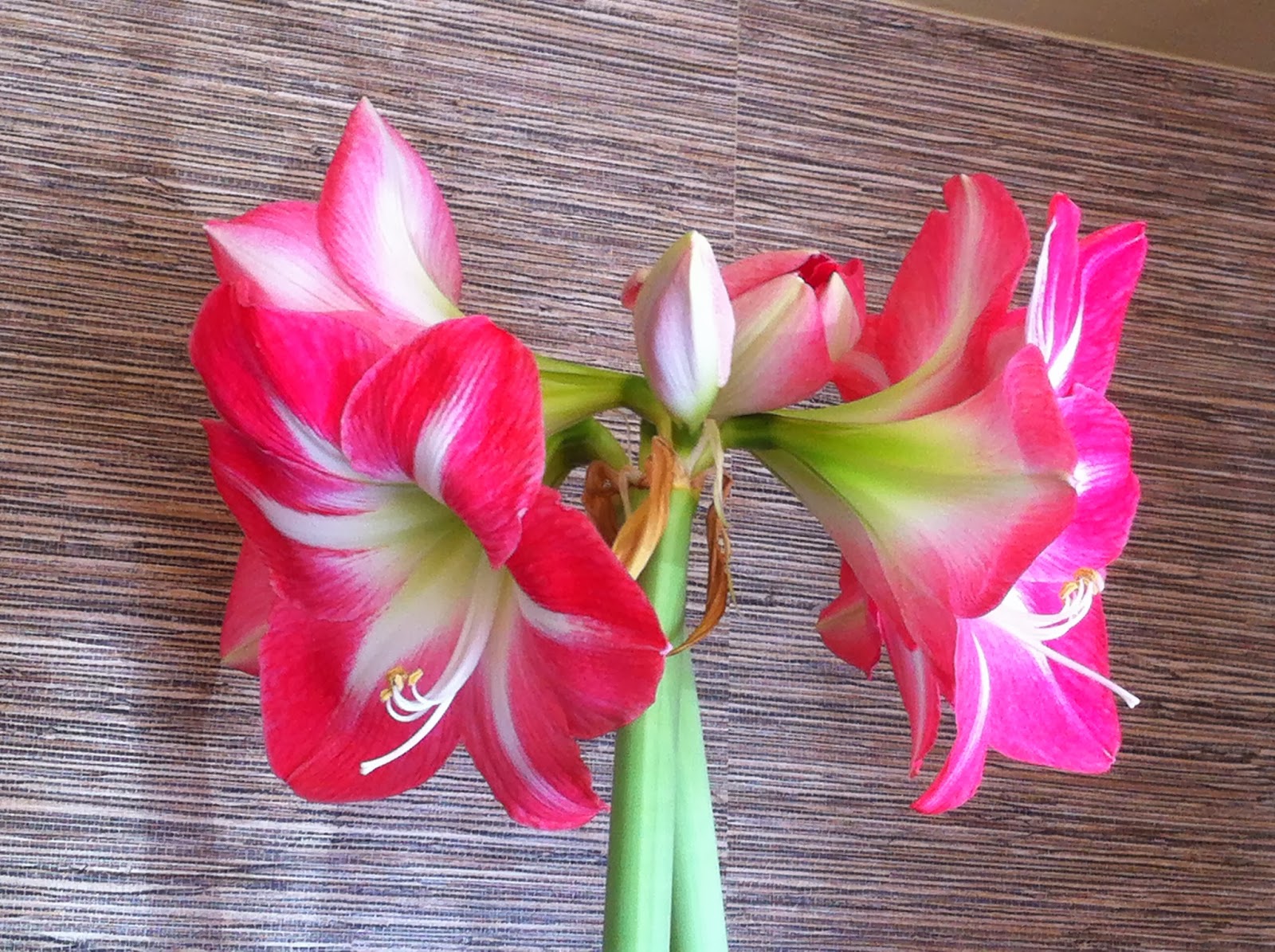 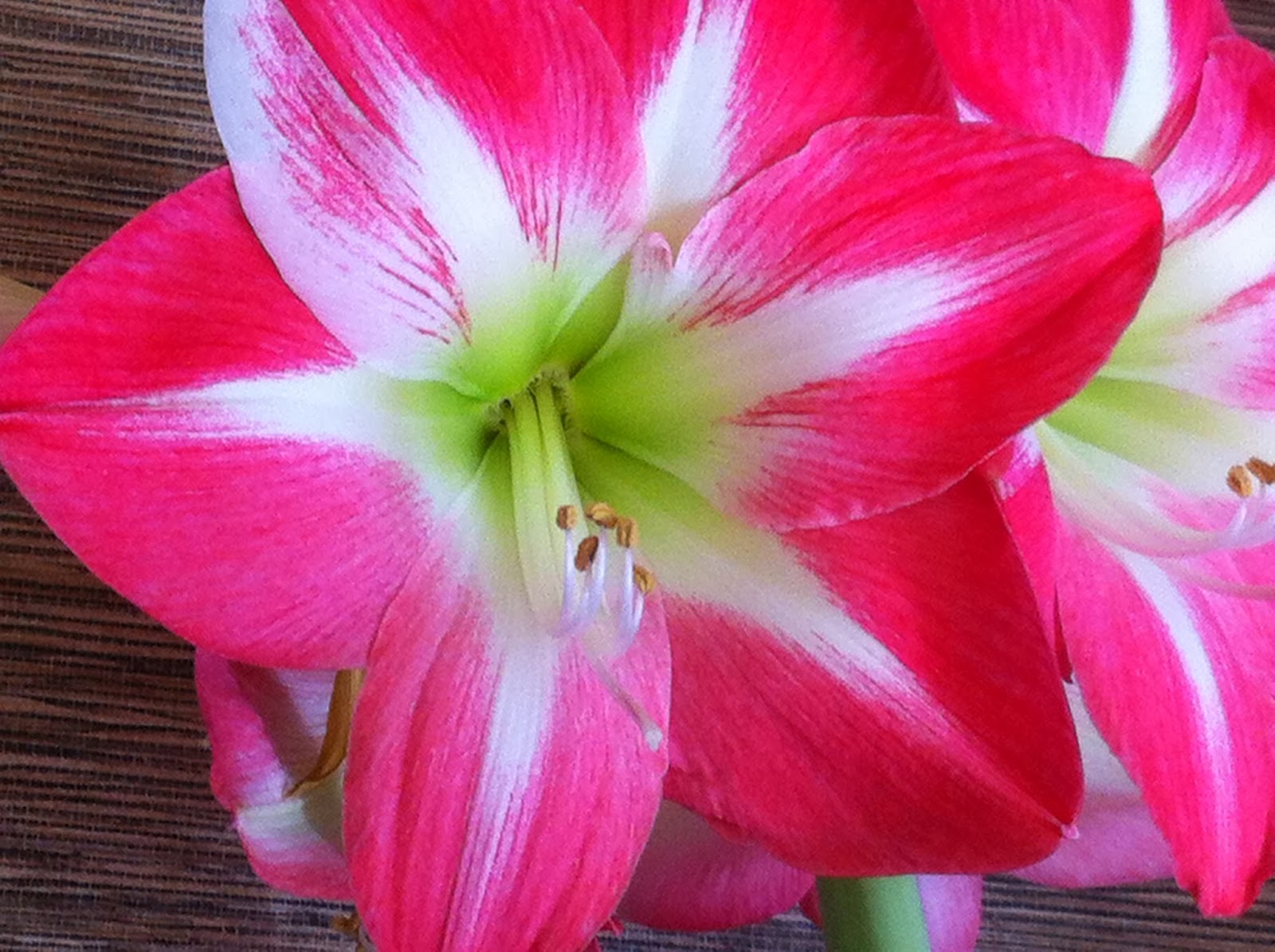 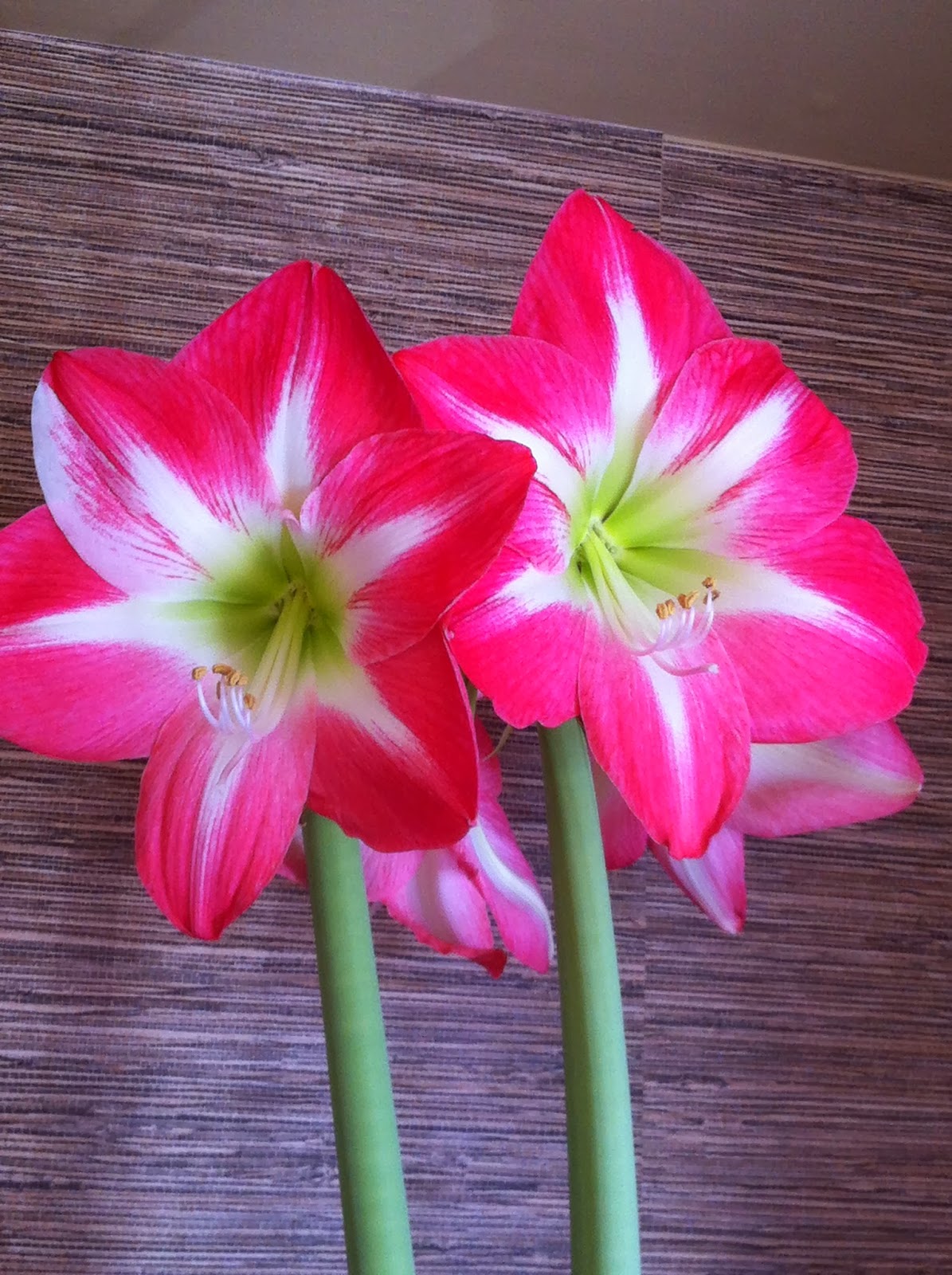 I got it at the grocery store in mid-December. It had started to shoot one tiny tim stem.
So I saved it and since I turned the pot everyday it eventually got straight and gave us 2 flowers.

A couple of weeks later, I first thought that it was the leaves coming out, but surprise! 2 new stems.

And with 4 flowers each! They are so lovely! They bring me joy in this cold February afternoon.

Try This for a change!

So if you've read yesterday's post and are looking to try something different....

Now I spotted this recipe in my favorite local newspaper (The Montreal Gazette), turns out it is from the Moosewood Cafe in NY state.

It is delicious even if I had to adapt it to the new food regimen!

Now this alls for carrots which you can't eat on the Dr. Oz 2 week program, so I replaced them with

orange peppers (or red, even yellow, you just need a burst of color!)

Be sure to make it the night before to let the flavours mingle and make friends!

I hope you find this as delicious as I did!

Here I was late December, early January, bloated, feeling disgusted with myself and scared of getting high blood pressure and diabetes...

Let's face it; I was back at the same weight I was in 2009 after gaining 30 pounds. I had lost my job the year before and was letting loose with my emotionnal eating.

I managed to loose the weight with a lot of veggies and protein shakes and soups....But I was feeling so dry inside.

I keep most of the weight off for 1 year and then it started to creep back up.

I  did the plan this spring but for some reason, I found it teadious, I didn't like most of the recipes...

and SURPRISE! More weightht back!

I did enjoy my seasonnal faves a lot! BRING ON THE COOKIES!!!

But I was due for a reality check.

On Jan 2nd 2014 I was watching Dr. Oz and there was a feature on a 2 weeks weight loss regimen to kick start things.

Here's the link Dr Oz rapid 2 weeks weight loss . The bad side: You probably won't loose as fast as the ladies on the show...one had lost 17 pounds in 2 weeks.

Good side: I am never hungry! Really!

And I discovered that I might be gluten intolerant. Now I followed the 2 weeks plan scrupulosly, but since then I allow some other things; like I tried a piece of french bread and I flt sick all night.

And I usually eat less protein at night.

So after a month I lost 8 pounds which I find fantastic!

We had a wee roadtrip yesterday...

We drove to Cornwall, donated a bunch of stuff to Value Village, then crossed the scary bridge to Massena NY.

Turns out they finally woke up (the goverment) and built a new low bridge. Quite a delight, but they still (the goverment again) still charge $3.25 to cross the bridge.

Well Massena is still Massena; it is a village, a poor village but it has a Riteaid, a Wallgreens and a Kinney drugs.

If there was a tier system, I would say that Riteaid is tops, next comes Wallgreens and for some reason Kinney drugs is the weird ghetto one....

It might be their geographic location...or just my perception

Then hit an antique market, very clean but nothing for us.

And we went to Price Chopper, again it seems the sad one; but not really cheaper than Hannaford (my usual grocery in the U.S).

It was there that I realized that powdered Coffee Mate in my fave flavors was a seasonal thing and so was turkey broth in a box, SEASONAL!!!

We crossed the bridge again to have lunch at the Cornwall BBQ, yum! 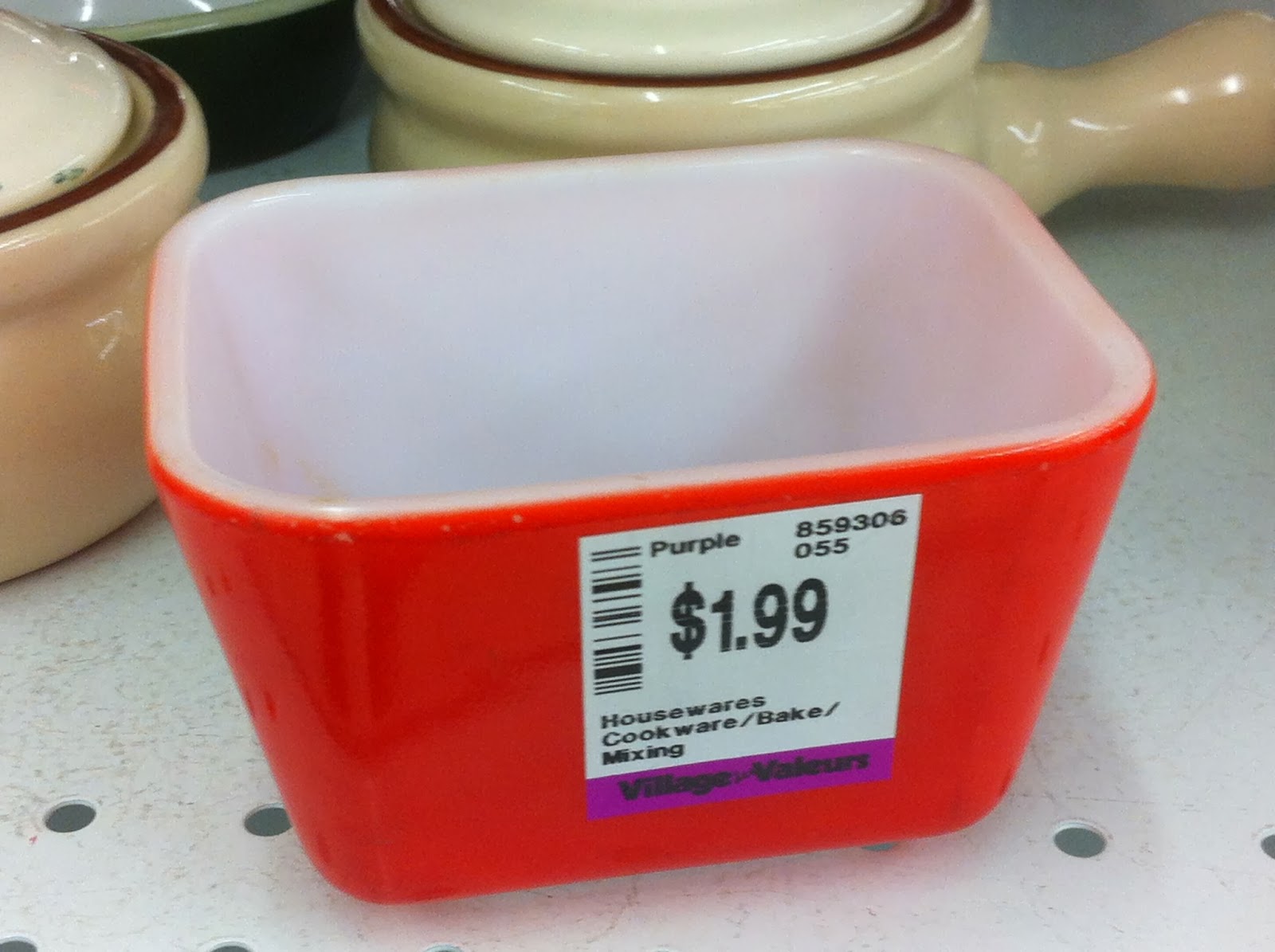 There were only 2 Pyrex at the Cornwall VV
This, not too bad and this This was sad even for .99cents

I bet next time I go it will be gone

It was a small roadtrip but quite fulfilling never the less, sometimes I just need a change of scenery.

We might cross the lines moe often from now on since Rachael Ray has introduced Nutrish cat food....Bob is cray about it!