The taste of vacation

Well I am on vacation for the next 2 weeks. Actually this week and the next.

Life is sweet. I always take the opportunity to eat food I love but seldom eat like Dairy Queen! 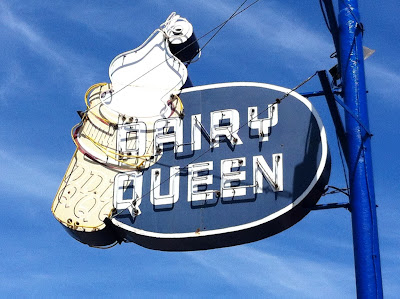 Would you believe me if I told you I LOVE THIS SIGN???
Of course you would! You know me by now! 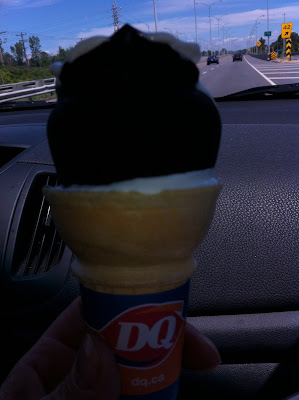 On Saturday there wasn't any plans for thrifting. We just went to Dan's daughther's place to measure windows and figure out what we needed to repair a wall and paint.

But I had to stop at Renaissance! Just so you know the weirdos from Thrusday night were all there on Saturday afternoon.

The employees are in the weirdo category as well...There's the lady that runs after you in the store to leave your bag at the cash (Heck the person that steels a $2 dollar shirt really needs it) and the cashiers that don't understand the cash register and the manager from France who knows everything and won't hesitate to correct your french. LOVELY! 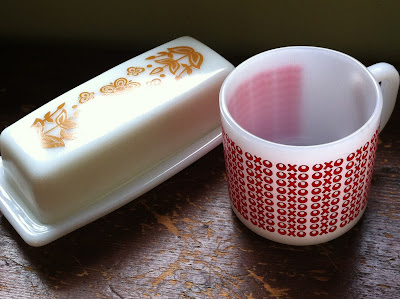 I found the Butterfly Gold butterdish at Renaissance.
the Oxo mug I found somewhere else....

On our way back, Dan saw a giant sign advertizing a garage sale. This sale was amazing! It is the once a year unbelievable sale. It was in a hardware store that closed in the 80's judging by the merchandise. 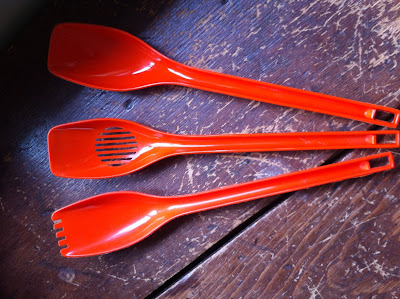 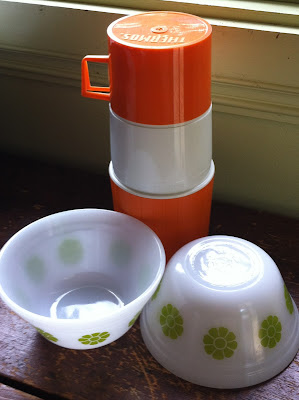 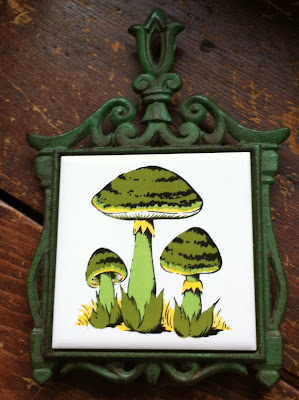 And a tackylicious Mushroom trivet
I still don't know what will stay and what will go in the Etsy store
Of course I still think about stuff I left behind...
There was so much! I could've gone every day for a week and buy stuff everyday.
But it was late in the day and the place is far from home so I got stuff that grabbed me.
Be well and keep thrifting friends!
Posted by Vonlipi at Monday, July 29, 2013 1 comment:

To tell the truth...I also collect plants...less than Pyrex mind you....

I have a soft spot for coneflowers 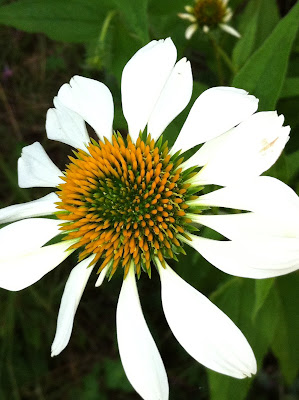 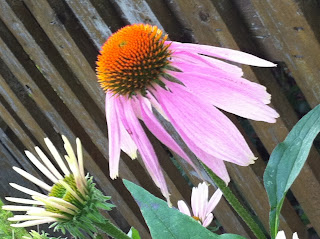 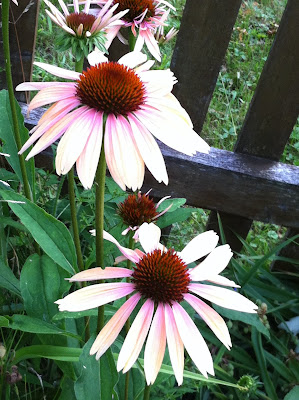 I will take a picture of this beauty in another light
because the orange doesn't show at all.
This one is called a Sunset 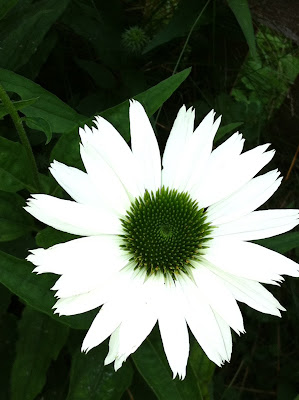 White with a green heart

The burgundy is not in bloom yet...and I have a double decker too that didn't show well...
I will try to reshot them during the week to share with you

I love coneflowers because they are sturdy,drought resistant and thrive in my crap soil!

Until next time...sleep tight my friends :)

Thank you friends for all your good wishes and love.

It was very appreciated.

This morning we packed the car with boxes and bags of donations and headed west to Brockville, Ontario.

Why Brockville? To tell the truth Dan thinks that this Salvation Army store is more deserving than the one in our area and they did sell me a Turquoise Snowflake casserole with lid for .50 cents....so I had to give back!

This time I found a barely used, unstinky,unscratched Tupperware for .50 cents. It is the kind you use to store food in the pantry 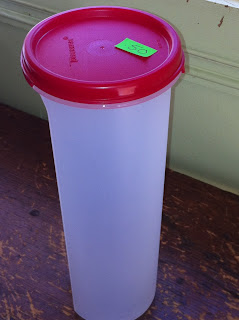 We had some of Don's Fish and Chips for lunch 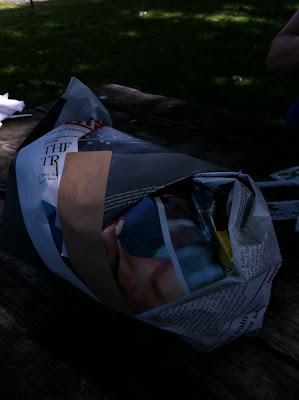 Promise of a tasty lunch 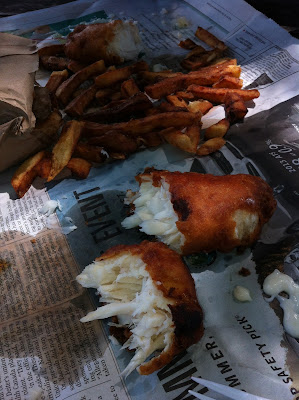 The fish is so meaty and cooked to perfection; next time we just might skip the french fries and get more fish!

Besides that no thrifty finds! But like the very wise Dan says...It might be a sign that we should purge the garden shed before we find more treasures....
I agree!
Tomorrow we have a program of getting rid of some invasive plants, relocating echinaceas and floating in the pool.

I'm sorry I've been M.I.A for the last seven days. This was not intentional.

On July 12th we got news that Dan's mom Rejeanne, passed away.

This made for a lot of mixed feelings even if we knew for quite a while that this was inevitable.

Rejeanne was a joyful, happy woman; she loved cats, she loved food,sugar,reading, crosswords,antiques and bacon! 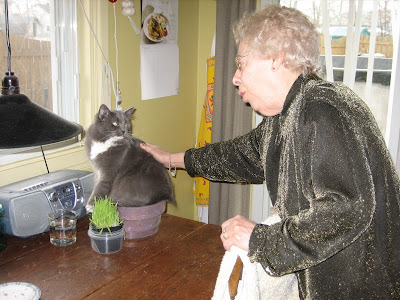 I think this is one of the last pictures of her before the Alzheymer was too severe and she had to go and live in a center.

Be well Rejeanne you are with your husband and your kitties now; be safe; we will be thinking about you and remembering all the good times.

I wish I could do a regular feature on Wednesday about food trucks but the thing is I never know in advance which one will be near my job.

Today I had 2 and I choose the Phoenix 1 truck, why you might ask?

2 reasons really: They serve sandwhiches on naan bread and they are considered an underdog.

They got less publicity than some of the others, they don't tweet much.... 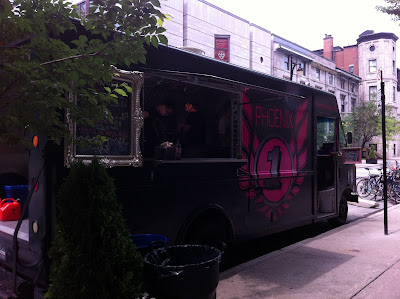 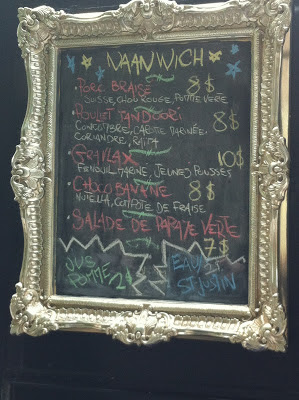 I had the tandoori chicken naanwhich 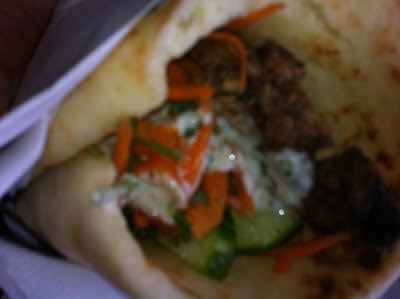 Sorry about the bluriness!
It was light yet filling, flavourful with a nice kick
Just what the doctor ordered in this crazy July heat.

My first but not my last!

Last week truck was fantastic but a once a month splurge calory wise, this I could get this every week!

I can't wait until they come near my job again!

Some you win and some you loose....

On the winning side: The food trucks are back in Montreal after an absence of 66 years. The mayor who had them outlawed was Jean Drapeau and he found them tacky and unhygienic.

In late May 27 licenses were awarded and the trucks will rotate to 9 designated areas.

I have been very excited ever since their coming was advertised because I have been drooling over the Eat Street tv show.

I have been following their schedule because 2 of their stops are near my job....So last thrusday I chose 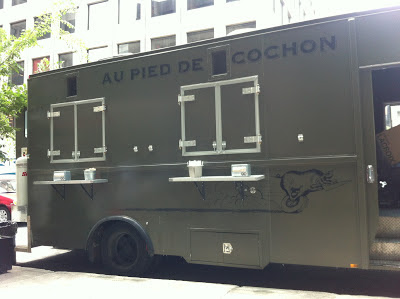 I had heard rumours of delays and long lines.... 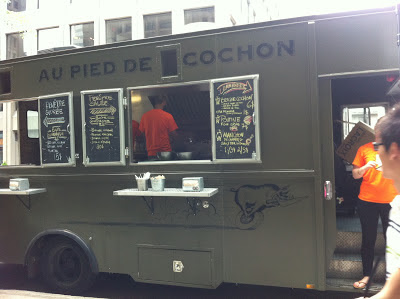 Oooh the windows are opened!

There is a savoury window and a sweet window.

The menu is small but decadent.

On the savoury side: The savoury donut; yes you read that right! Instead of a bun you have a donut , and it is split in 2 and stuffed with maple brine pork roast, ham and pig's tongue.
Add some ballpark mustard and onions and cheese (extra).
I never tasted the tongue....but the harmony of this was fantastic!  It tasted a bit of smoked meat or corned beef.
I was wise to bring a green salad from home to complete this; otherwise I would have felt stuffed if had the porky lunch box: The savoury donut, a fois gras poutine,a sweet donut and a maple soda.
I will be back to taste some of their other fare... 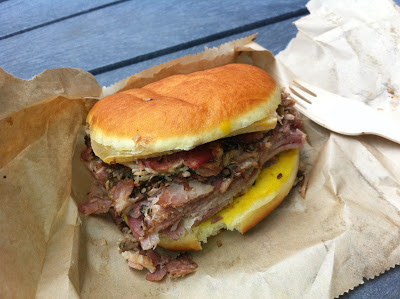 I don't have a big bucket list...I'd like to take Dan to Paris and Italy, 2 places I was lucky enough to visit. But mostly I want to have enough money to pay the bills, renovate the house and put some aside.
There are something I've never eaten....Like a chili cheese dog
In Quebec those are called Michigans with cheese....
I had one last night.... 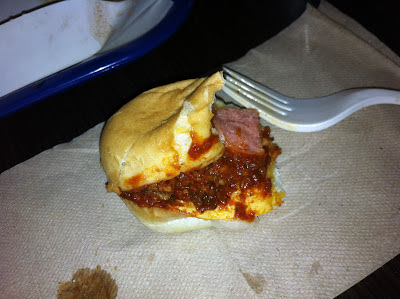 Well like my mother used to say....
Nothing to write home about!
The sauce was too acidic, but bun should have been toasted and the dog too.
But the fries were fantastic as usual!
Be well!
Posted by Vonlipi at Saturday, July 06, 2013 1 comment:

I guess we all have our wanted thrifting lists. In fact I have several; one for Pyrex, one for mugs, one for glassware, another for lamps, blowmolds and the lists go on and on...

I had been yearning for those for quite a while, but whenever I found them they were too expensive for my taste. 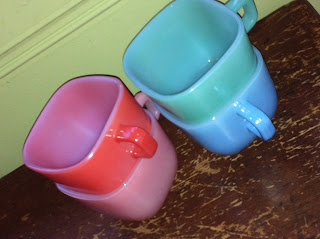 So I got 4 Glasbake soup mugs from the Gananoque Flea for $10.

Around here I usually see them for $10 each, so I feel good about the buy.

I had a pink one, really beat up from the Sally Ann, but as per the house rules....it needs to go...to the church basement.

From that roadtrip I also  found some pillow cases and some old Mason jars.

All in all a good day. I should be able to post pictures for the next post

Like i told you before, I didn't find much on my long weekend in Maine... 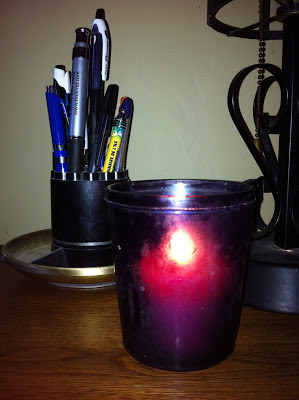 I found this amazing purple jar that I'm using as a votive holder.

From the sign in the shop, I learned that it was originaly clear glass but a chemical turned it purple over time....Wow, I love the color! 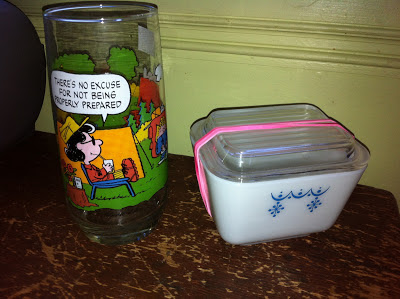 I've been eyeing the Camp Snoopy glass collection for a while now but I always find them too expensive, so I was thrilled to find this one for a dollar.
My cousin Josee had expressed the desire to get some fridgies, so this one was a great thrifty buy. I also found a glasbake milk glass mug for .99 cents at the Scarborough Goodwill, but for the time being it is missing in action...»oh well!